Iquitos: The World’s Most Isolated City

Peru is an extravagant country to visit. Here, at Evolve Tours, we are familiar with this. We travel down south to Peru often, and offer guided trips​ to the area. During these trips we’ve gotten to​ know the hidden gems. ​

Iquitos is one of those gems.

So, if you have a little time before heading to​ Cusco from Lima, why not check out the planet’s most isolated city?

Iquitos: The World’s Most Isolated City 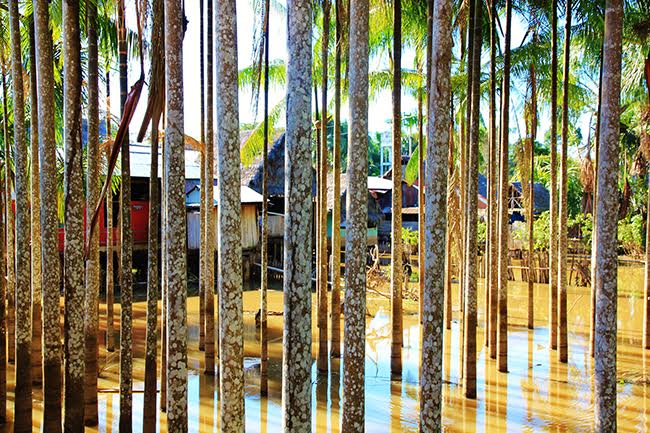 Iquitos is a prosperous, jungle metropolis and capital of the Loreto Region.  It sits just a short distance away from where the Rio Ucayali becomes the Amazon River. Abounding with vibrantly coloured architecture and mototaxis whipping around like swarms of flies, this buzzing “capital of the Peruvian Amazon” is the largest city in the world not accessible by road (you are only able to fly in or take a boat along the Amazon from Pucallpa which would takes 4-7 days!).

This whacky municipality owes much of its fortune to the rubber boom at the turn of the 19th century.

It is a city where the present is flanked by the decrepit past. Where poverty meets the clambering modern. Where jungle creeps at the foot of every doorstep. 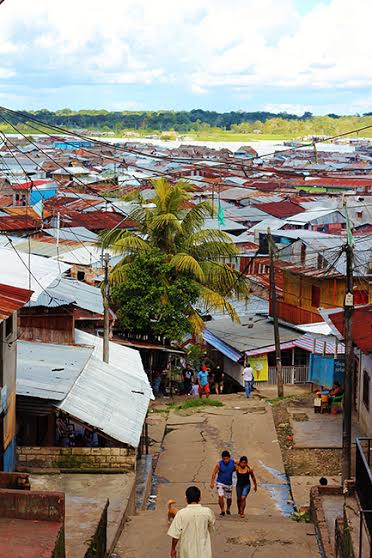 The city was established as a Spanish Jesuit settlement in 1757, and was officially founded by the Peruvian Army in 1864. The name is derived from the Iquitos​ ​ people who inhabited the area, along with several other tribes, over thousands of years. It is here you are able to see the clash of colonial past come together with rural Amazonian culture. You can find old, mosaic-tiled mansions with Spanish windows, often abandoned in the midst of the city.

In the downtown area you can also find the town of Belen. This shanty town sits along the stretch of the river bank off the main boulevard of Ramirez Hurtado. Just a stone’s throw away, tourists enjoy their morning coffee in French-style cafes, while the markets sell potent medicinal herbs for shamanic rituals next to stalls stacked with children’s toys. 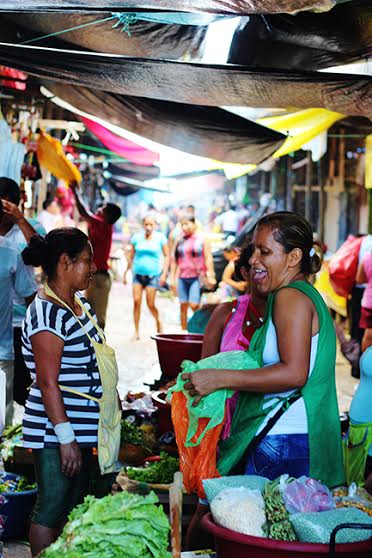 I, personally, had the opportunity to visit this isolated city with a friend of mine. As my friend and I strolled along the riverfront, not yet adjusted to the seemingly suffocating humidity, I took in the delights of this vibrant city and thought about how we had almost not made it there. Believe it or not, we had struggled over the decision to include Iquitos on our itinerary. We were given an awful lot of negative advice on the area. Iquitos, I had heard, was a mere stopover for tourists on their way into the jungle.

It wasn’t anything like we’d been told. It was really very pleasant, full of people who were generally friendly and who held a courteous manner towards tourists. It certainly is a fascinating little city with an awful lot to see.

Where to go in Iquitos: 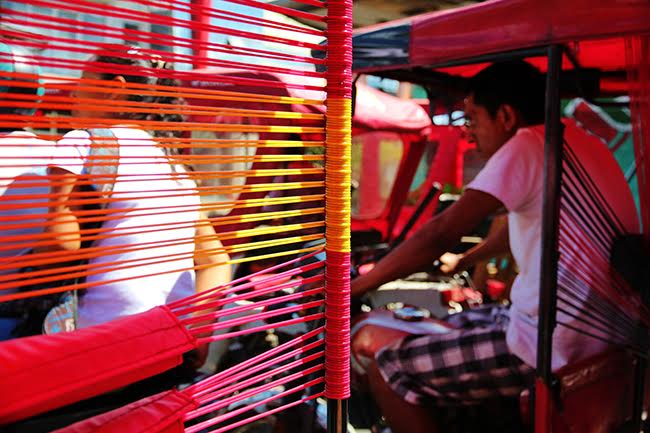 A good place to start in Iquitos, should you decide to stick around for a few days, is their Plaza de Armas. This is an urban square in the centre of the city. This disclosed hive of activity is really rather striking and surrounded by some of the best hotels and restaurants in the city. Here you can see the Iron House​, designed by world famous Gustave Eiffel, or watch the sun set behind the stunning Central Cathedral.

I found, due to the oppressive heat, that I needed to stop frequently to rehydrate and, well, to eat. There are several delicious restaurants where you can get your fill, and where the menus offer a wealth of choice for every dietary requirement. Yes, some food and drink tends to be a littl​e pricier here than other parts of Peru as they import much of what they sell. But, it’s also easy to find the freshest food you’ll ever taste. Try a fish caught that very same morning, or brave bizarre, alien-like fruits which will make your mouth water.

Dawn on the Amazon​ is a great little café-restaurant with a huge menu and lovely cocktails for evening dining. And if you’re interested in a good brunch at a decent price then you must stop by  The Amazon Bistro​ a little further into town on the boulevard. This French-style restaurant with its high ceilings and mahogany decor is certainly not authentically Amazonian, but it’s pretty fabulous for sipping coffee while sitting on their patio and watching rainbows stretch their way across the river.

Of course, for those with iron stomachs, you should head down to ​Belen Market​ where you can taste all kinds of Amazonian “delicacies” – such as huge, crunchy worms on skewers or deep fried ants! The street food in Iquitos is in abundance, and often fabulous. Go and try​ Yucca Empanadas​ on Jr Garcia Saenz. They’re hard to beat!

Belen​ is certainly a part of the city you must see, either from the market area of via a boat tour. This shanty town jutting out of the river’s bank really is a spectacle. I do warn you to keep an open mind, however. Why? It is quite grubby (wear sensible shoes, not sandals) and the market is swarming with vulture-like creatures perched on every canopy waiting for the day’s scraps to be tossed out. It is also not a great place to carry valuables with you. If you pull out a camera you will be immediately surrounded by security ​to escort yo​u while you explore the market. So, be cautious.

If you are interested in finding out a little more about Iquitos’ rich history, visit the ​Museum of Indigenous Amazonian Cultures​ on the boulevard at Malecon Tarapaca a few blocks from the Plaza. This is where you can find out everything you need to know about the indigenous cultures of the region and the advent of colonialism. The cost is 15 soles for tourists.

Why not take a boat tour or mototaxi to see one or two of Iquitos’s animal sanctuary’s and conservation projects during an afternoon? ​There are many boats on the river front that will gladly take you to the sanctuaries (groups are cheaper), and the ​Pilpintuwasi Butterfly Farm and Animal Orphanage​ is the place you want to go. This small group of animal lovers do a fantastic job of rescuing orphaned animals being sold on the market and rehabilitating them before releasing them into the wild. You will be instantly surrounded by friendly monkeys climbing all over you upon arrival. Either that, or visit the ​Refuge for Hurt Manatees​ about a 30 minute ride by taxi from the centre of town where you can feed and stroke friendly manatees! 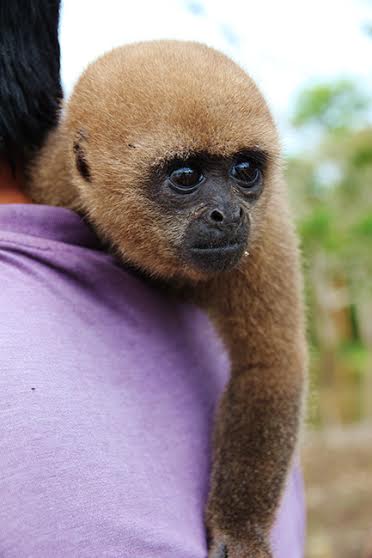 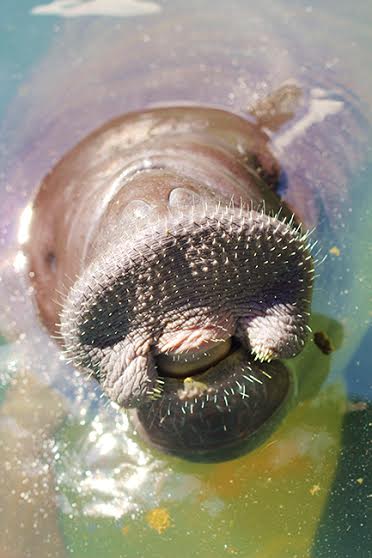 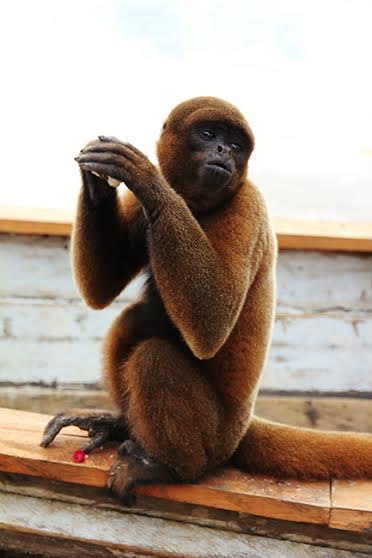 So, if you have a few days before hitting the jungle, why not spend some time wandering around this spectacular city? I can guarantee you won’t be disappointed. 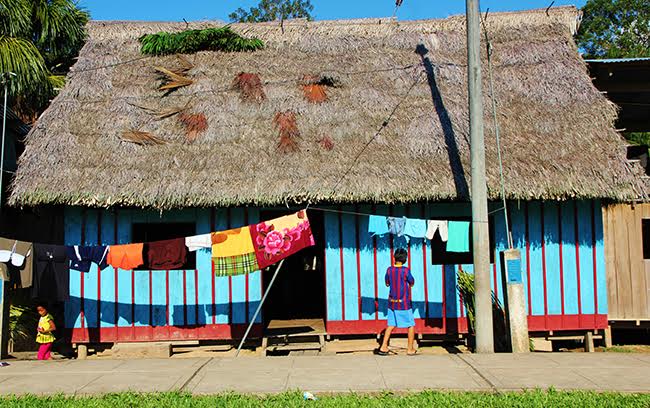 Alanna Byrne is a writer and NGO coordinator currently living in deepest, darkest Peru. Originally from London, UK, she has traveled from a young age and lived for two years in Toronto. She’s about to embark on more backpacking adventures, first across South America and then onto New Zealand and Australia. When she’s not racing around the world, she can usually be found reading in a quiet corner somewhere or in a crowd listening to loud music. Follow her adventures here: www.awritetoroam.com.